The city of Madrid is a metropolis of more than 4 million people; although many have a recent rural heritage, their artistic and cultural output, as with many cities, is out of touch with rural realities and oblivious to the material and territorial resources that sustain the city. For this reason we consider Madrid to be one municipality among the 179 counties in the wider region and aim to create a bridge between the country and the city.

The CAR’s sphere of action is the Community of Madrid. New alliances will be traced with different subregions including the meadows of the South-East, Guadarrama, or the Northern mountain region known as “Sierra Pobre”. The latter is an area the CAR is particularly interested in engaging with from an early stage. , The CAR simultaneously participates in Inland’s network of spaces including the small village in the Cornisa Cantábrica, or the lot in the Tramuntana mountains in Mallorca.

The CAR functions within the neighborhood of Quintana, in the Ciudad Lineal district. In the initial phase, contact is made with the neighborhood by way of encountering its local institutions, associations, independent spaces, collectives, etc, all of which are invited to take part in the project and make use of the CAR.

All of the CAR’s activity is linked to a network of international agents and institutions, from self-organized to established art spaces, universities and organizations of pastors and nomads. 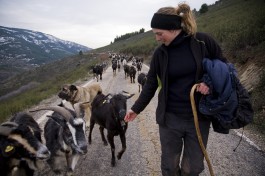