End of residency in C.A.R 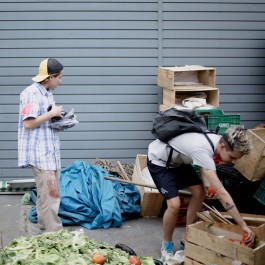 It is a Brazilian collective that was created in 2017 in Lucerne, Switzerland, where some of the members of this group currently live. It was there that a group of artists, when they wanted to apply for a residency, saw that they needed the support of an institution that would solve their expenses during their stay. So four of these artists, all Brazilians, decided to create their own institution, which is an unknown university.

The name of the collective is taken from the title of a book by the writer Roberto Bolaño. Jonás, one of the members of the group with whom I spoke on several occasions during his stay at the CAR, explains the idea of the Latin American infrarealist Roberto Bolaño:

“he says that we all have a university inside, and that we must recognize the knowledge we have, which is valuable even if it is not recognized or legitimized as are the ideas that are generated in universities or institutions whose knowledge is recognized by the Western world” 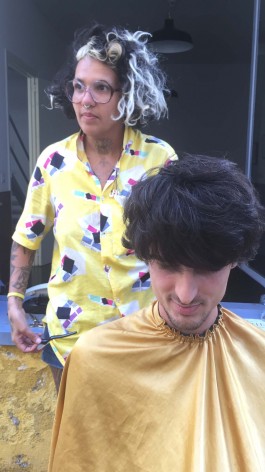 This group is activated when one of the members wants to use the name. One example is that this year Jonás and Valentina were called to propose a project at the Casa do Povo or House of the People, a cultural center located in the Bom Retiro neighborhood in São Paulo, the project had money for production as well as for the guest artists.

Jonás and Valentina proposed to work as an unknown university to discuss the depletion of the earth's resources, so that the reflection revolved around the reuse and non-creation of new things, for which they proposed a series of actions that would try to put into debate the things that already exist, analyze them and unlearn what is known about them.

Jonás says that today in Brazil it is a privilege to receive money for the production of art, as well as money for artists. The first thing they did as residents was to do research at the neighborhood level to see what they could find so that they could open their discussions about reuse. Bom Retiro is a neighborhood that today has a strong attraction to tourists, due to the gentrification that this neighborhood has experienced in recent years.

In their first outings to the "countryside" they discovered that Bom Retiro is a very eclectic neighborhood, where social groups such as Jews, Portuguese, Spaniards among many others stand out. Each of these groups, says Jonás, has a place to pray, a history, as well as an institution that supports them. But, not so the dissidents, or homeless people, who are invisible, like the transsexuals, a vulnerable group that by necessity lives in the street and suffers from hunger.

Living on the street, the artist points out, is very common in Brazil where there are many poor people who don't have money to buy food. Also, Jonas said, 95% are of African descent, which shows that historically the marginal people in Bom Retiro are the groups that have been dominated by the European groups that have been the historical colonizers. Jonás explains that it is the people of African descent who have never had the opportunity to survive the violence of the capitalist system.

Unknown university, after their tours of the neighborhood, formulated a series of questions, these were focused on the criticism of the system of food consumption. So they created a kind of counter-system that would operate so that people living on the street would no longer be invisible.

They did a series of tours of the neighborhood markets to understand how they worked in the open markets, according to Jonás, you throw away a lot of food that you can still use, this says Jonah is a global constant where you have to reflect.

“We realized that a lot of food was not sold because it was not aesthetically pleasing, for the people who could buy it. We found apples, pineapples, mangoes, lettuce in perfect condition and that it was practically already on the street. We found lots of green beans, cauliflower, broccoli and lettuce that we made great salads with”

The problem of discarded food in the markets in Brazil for Jonás is a question of aesthetics:

“if you have a big and pretty fruit with good color, they will surely grab it and buy it, but if you have a fruit with a bump or with a not so flashy color they won't buy it”

The unknown university project was to bring all that food, which was carefully chosen, to be put in boxes and taken to the Casa do Povo for cooking. They proposed that the food would be free for those who could not afford it, and would have a cost for those who could pay, with this new system they created what Jonas calls a social responsibility circuit:

“I cooked for free, because there were people who could not pay for food, we believe that everyone should have the opportunity to eat good food, there are many people who eat well every day of their lives, and others who have no opportunity to do so. The system we made was the following; the one who had money could pay for food, could pay for my work and Valentina's, but, I would also pay for those who do not have money to buy food. So during our stay we set up a long table every Friday of the month that came out of the door of the Casa do Povo, covering part of the street as well. The people who went to eat were people who lived on the street and who came there because we told them in advance about the project we were doing, where we were cooking for them.” 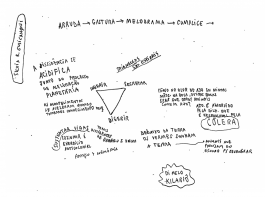 Jonás' experience at CAR was very similar to the one they had between April and May at the Casa do Povo in Brazil. The main idea of this group was to do, as in their previous residence, a research at a neighbourhood level to understand how fruit and vegetables are mainly sold in the markets and fruit shops that are in some of the neighbourhoods of the Ciudad Lineal district. The collective started a series of experiments to get in touch with the vendors and try to obtain the fruit and vegetables that they themselves no longer put up for sale.

The experience of this experiment is that a lot of food is wasted just because you want to sell the best, and that those who ask for what was not sold are not welcome. According to Jonás this has to do with the "facade" of each one that if you are white and rich, of course they would give you the food even if it no longer serves, but to us who do not have a "facade" of a rich or white person they do not give us the food, which shows that both in Brazil and in Madrid there is a lot of racism involved, the artist says that while you are white and it seems that you have money to buy food they can even give it to you, but if you have a marginal or "poor" aspect they do not give you anything.

“Those who sell food do not give anything to people who really need it or want to do some work with it, food is only given if you are white and if you are handsome, and well unlike Brazil, here in Madrid you can be fined if you are seen looking for food in garbage cans, rummaging through the garbage is forbidden, and whoever does it is because he is an immigrant or a marginal”. 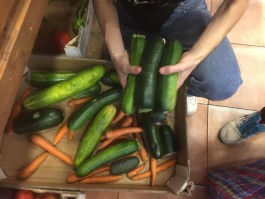 In a first outing to the "countryside" with Jonás and Valentina, the idea was to take some samples in some of the fruit shops and markets in this street. What we found was that the sellers would get annoyed if we asked them for fruit or vegetables that they did not want, they refused to give even if they had them, on a couple of occasions, although reluctantly, they allowed us to take the fruit they had in a separate box and they had it there because they had some bruises, but it was perfectly for the purposes of the experiment.

In other fruit shops they didn't even want us to take the fruit they had already chosen to be removed, and sent us directly to the organic containers to see what we could find. In another store, the fruit they no longer wanted was finished off like that; two kilos of pumpkins or carrots for 75 cents.

Many of the sellers did not understand why we wanted to take the bad fruit or vegetable when they were selling the best fruit, that shock caused by the experiment Jonás told me also lived in Brazil where the people who were selling did not react well when asked to take the food they no longer wanted.

With what this Brazilian collective gathered from the samples they were taking from the fruit and vegetable shops, as well as other samples that came into their hands, they made small mountains of organic matter such as hair or sui generis samples that were found. They first had this organic material on display/decomposition, and then used all this detritus as compost. 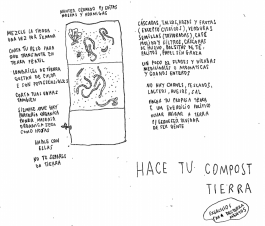 The Brazilians left at CAR a piece entitled "Still Alive" which is a worm compost that will remain in the center to encourage this work with worms, as a metaphor for the cycle of life, where the worms are the ones that by eating the organic waste, produce or excrete soil, which can be used as natural fertilizer for plants, thus giving rise to the beginning of a new cycle of life.  The idea is also that this worm compost is fed from the organic waste generated in the CAR's kitchen, and that its process can be shown to the neighbors who want to enter the art of worm farming.

“During the month of residence, we questioned access to food. To question it, we move to the animals that clean the subways that shit the earth and start organic decomposition. Vultures, earthworms, cockroaches. We use the practice of creating soil as an a priori symbol for the construction of gender and systemic dissident bodies, marginalized from cis-centric cities. Observing the decomposition of living organisms and their transmutation into fertile matter makes it possible to refute the separation of the earth, a colonial heritage, and to integrate with it, to think in terms of a measure of temporality that does not repress existence. Creating land is an intimate gesture.” 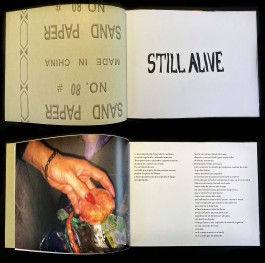 You can download the publication of the project Still Alive here
or buy a print copy at C.A.R.