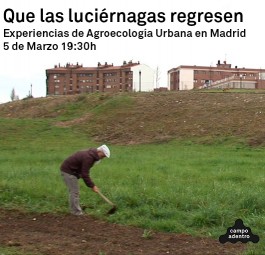 MAY THE FIREFLIES RETURN

In February 1975, Pasolini wrote in Corriere della Sera about the "disappearance of the fireflies" to warn of the progressive de-ruralization resulting from the growing predominance of urban environments in contemporary capitalist societies.  Referring to this metaphor, this round table brings together guests from two gardens, one from a neighborhood and one from a museum, an environmental initiative from a school and a film festival focusing on various related experiences around the world. Different approaches and ideas to show how agro-ecological sensibility claims a place in the
city

Xisela Garcia Moure is a member of the Break the Circle Transition Institute. She has been working for 6 years in the community garden of the CA2M - Centro de Arte Dos de Mayo in Móstoles. She is a permaculture designer and has a background in agro-ecology. She says of the CA2M garden that "it is a place to experience urban ecological agriculture, always bearing in mind that this is an indispensable starting point for facing the great challenges of the 21st century (energy crisis, climate change...). Every year we improve and perfect the system by seeking the most sustainable and at the same time most productive ways, while making people aware of the need for a change in our model of society".

Maria José Obelleiro is a resident of the Lavapiés district, a graphic designer by profession. Since the beginning (2008) she is part of the project ESTA ES UNA PLAZA, a project of citizen participation self-managing a public space (community garden and cultural centre). Her work focuses on creating the political-legal framework of the project, managing cultural events and negotiating with the administration for the cession of the space and various subsidies (public-social cooperation): "the experience of ESTA ES UNA PLAZA has taught me to work as a team on a large scale and to be able to articulate collective intelligence while connecting with it. The core of the project is the development of sustainability, the social fabric and shared pedagogies".

In relation to urban agriculture, Alberto Peralta is one of the founding members of the Network of Community Urban Gardens of Madrid (Rehdmad) which in 2012 was recognized by the UN Habitat Committee as "Good European Practice in Cities". In 2015, together with people linked to the collaborative work, he forms the City-Garden Collective: An educational itinerary on all the learning that can be acquired in the community gardens. Since 2016 it has been programming and coordinating the "Humus Revolution" festival on the Huerta y Ciudad for La Casa Encendida in Madrid.

David Criado is the head of the environmental committee of the AMPA Amador de los Ríos. The environmental committee was born from the evolution of the old garden committee that was in charge of managing activities in the school's garden. Now, in addition to continuing with this work, carrying out planting and care of the garden, we work to create dynamics that promote knowledge and care of the environment, such as visits to large parks in Madrid teaching children to recognize their fauna and flora. We are also open to collaboration with other associations, we have made some planting of oaks. Another line of action is to create synergies with other AMPA committees on similar topics, for example with the committee on dining and healthy eating.