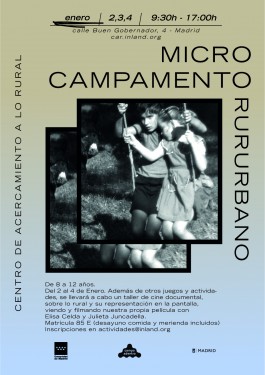 For girls and boys from 8 to 12 years old. From January 2nd to January 4th. In addition to other games and activities, there will be a documentary film workshop about the rural world and its representation on the screen, we will also be filming our own film with Elisa Celda and Julieta Juncadella.

The workshop is aimed at children who want to experience with the tools of documentary filmmaking. The proposal focuses on thinking about the rural world and its representation in cinema over three days, in which we will watch films and film our own.

The cinematographic views on the rural world are very diverse and go beyond the ethnographic and the urban approach. From CAR in the city of Madrid, we invite you to think about the rural world from different personal experiences, in order to share our sensations and ideas about the world we live in.

On the first day, we will take a tour by watching fragments of films on the proposed themes from the beginnings of cinema to the present day. We will comment on them all and choose a specific theme to shoot collectively in the CAR and its surroundings.

On the second day we will go out to the streets to film. Everyone will have the opportunity to participate in the filming from multiple approaches (camera, moderator, director, sound technician, etc). Back in the CAR, we will share sensations.

We will finish the camp experience on the third day with the collective edition of the material and later projection. For this, we will invite parents and friends to share the creative processes and the works created.

The workshop will be given by the collective Lejos lejos, formed by Elisa Celda and Julieta Juncadella.

Elisa Celda studied filmmaking at EQZE, Donostia and ECAM, Madrid. Her work has been presented at festivals and institutions such as Festival Internacional Play-Doc, CBA (Madrid), Ionion Center (Greece), CCE in Montevideo and PhotoEspaña among others. He won the Generation 2020 Award from La Casa Encendida (Madrid).

Julieta Juncadella studied filmmaking at EQZE, ENERC and UTDT. The films she has produced have been in festivals such as Bafici, San Sebastian and Biarritz, winning numerous awards including Hubert Bals Fund (2019), ArtéKino Award (2019), National Fund for the Arts (2017), Best Short Film in Bafici (2017). He currently teaches film workshops to young people in Tabakalera, Donostia.